After the most insane uber experience (strike that, Down the Street holds the record for that) and almost missing our flight, Kelsey and I landed in Costa Rica late Sunday night. We booked accommodations for the first couple of nights but the plan was to just wing it the last few days.

Outside of the San Jose airport, we saw a guy holding a sign that read “TAYLER SHEPHERD”. Quickly after, we hopped in the car with him and another guy who spoke absolutely no English and trusted they would take us to the right place. It didn’t take long for us to realize how crucial Google Translator would be for this adventure. ¡Me encanta espanol y si se puede!

Hotel Villa Dolce was cheap, close to the airport, and late night shuttle service was scheduled for us. The front office was closed but, thankfully, our cabbies knew how to get in. They grabbed a key and opened a room for us. It was quite odd but we went with it. After spending about 15 minutes trying to figure out how to lock the door, we finally got some sleep. (turns out it locked automatically) 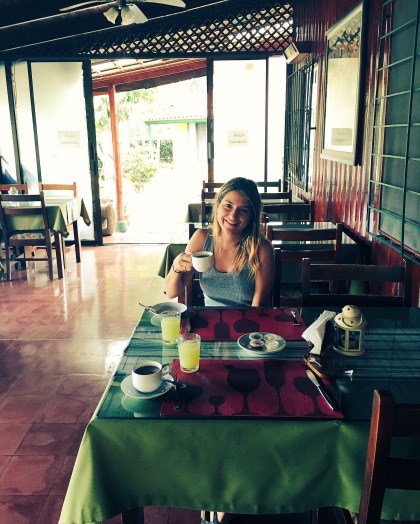 The next day, our mission was to make it to La Fortuna. We enjoyed a delicious breakfast, which was included with our stay. The man working the front desk called us a cab for the bus station. When we arrived, we started asking around and found the ticketing counter. We paid about 2700 colones ($5 each) for the tickets and only had to wait about an hour.

We weren’t exactly sure how long the ride was but after 4-5 hours and one bathroom break, we finally made it to La Fortuna!

We rented a private room on Airbnb that was part of a hotel, Tifakara Lodge. It was less than 1/4 of a mile away from La Fortuna Waterfall.

After checking in, we headed uphill, then walked down 500 stairs for a nice dip in the waterfall. Later that day, we went into town for dinner at Lava Lounge. We were told sometimes they have live music, but with it being Monday night, there were no bands to be found.

The next morning, Kelsey and I headed to the Tifakara dining area for complimentary breakfast. Breakfast was one of my favorite parts about Costa Rica. It was always fresh, delicious, and crucial fuel for our long days.

We made friends with Frank from the front desk and he was FULL of recommendations. He let us feed one of the parrots that lives on the property. The other parrot was injured from flying into the glass window too many times. Ouch! 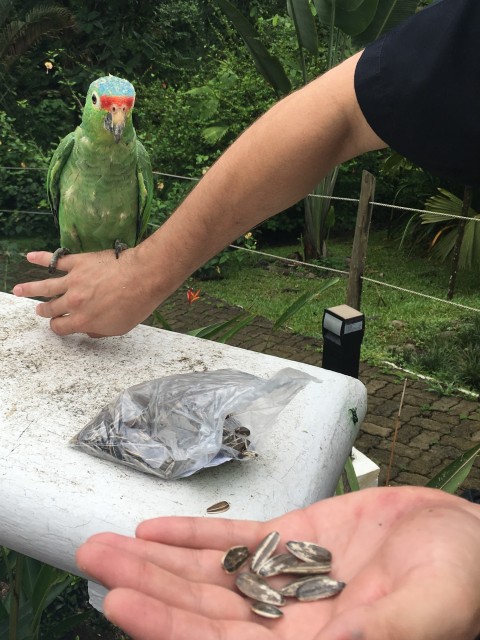 Our original plan was to stay in the airbnb one night, then stay in a hostel for two. We were enjoying our stay at Tifakara so much that we decided to stay at an extra night.

Frank booked us a river rafting tour then gave us a ride to the registration office in town. Everything he recommended was affordable and so much fun. Frank was AWESOME.

Kelsey or I had never river rafted and we had no idea what we were in for. During our shuttle ride to the river, one of the guides, Jose, briefed us on what we’d be doing and how we’d be doing it. Kelsey and I lucked out with having Jose as our guide on the raft. He was really fun and full of knowledge about animals and Costa Rican culture.

Our raft crew was Team Pineapple (las piñas)! Jose broke off tree branches and stuck them in our helmets so we looked like pineapples. He definitely intentionally flipped our raft more than once but we embraced the crazy and had a blast.

The couple on our raft was eloping at La Fortuna waterfall the next morning.
¡QUÉ ROMÁNTICO!

We headed to a farm for lunch with our new friends for the next part of our rafting tour. In Costa Rica the main breakfast, lunch, and dinner meals are often called “typical”. I found this funny because typical is sometimes considered a negative term in the U.S. but it is taken very literally in CR. I doubt many American restaurants call their burgers, “typical”. Our typical lunch consisted of a wide variety including rice, beans, meat and other tasty sides. It was all cooked on a wood burning stove! 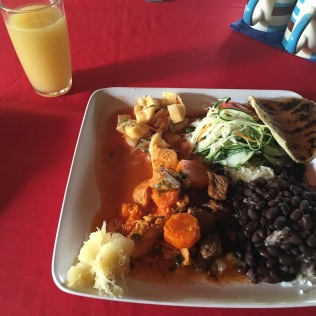 A lady demonstrated the coffee making process and we were served a fresh cup. We learned about sugarcane and tried samples of raw cane. We ended the tour with shots of moonshine. It was like 150 proof! EEEK.

We were pretty worn out after our tour, so we grabbed drinks and cheese fries then headed to a private hot springs resort called The Springs (Frank recommended it). We made it to The Springs one hour before closing and the manager ended up selling Kelsey and I two-day passes for the price of one day passes. They w anted us to be able to come back and see how beautiful it was during the day. I love these people! 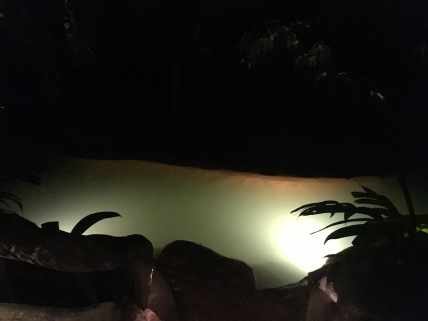 We popped open ice cold Pilsen’s and hopped from hot springs to hot springs… there were 28! When we got to the top, out of the corner of my eye, I saw a mysterious man lay on a mat and fly down a slide. I looked at Kels, grabbed a mat, and went for it. We had such a good time at the resort but never made it back during daytime.

The next day, we were welcomed with free drinks at our hostel, Arenal Hostel Resort. We decided to get a private room for the night which was about 20,000 colones (about $40 total). I highly recommend this chain of hostels if you’re traveling in Costa Rica.

Frank, in true Frank Fashion, booked us a ziplining tour through Ecoglide and the bus picked us up right outside of our hostel. When we got to the zipline park, we saw a bunch of people getting out of a truck COVERED in mud. Immediately, Kelsey and I questioned what we were getting ourselves into. We were rest assured that we’d be just fine when the next group of twenty-somethings from Orange County walked in, selfie sticks in hand. Turns out, the first group had just finished doing some next level shit. 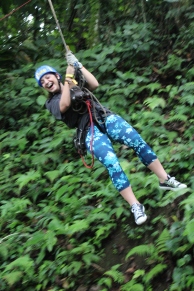 We went on 7 ziplines, flew around on a tarzan swing then, did another 4 ziplines. It was pouring down rain the last few ziplines, which makes you go SUPER fast! We had such a blast ziplining and the views were incredible.

That afternoon, we walked around La Fortuna shopping for souvenirs. (side note: San Jose has a huge market on Av. Central with a lot of the same stuff for cheaper, so I suggest doing it there if possible.)

We grabbed drinks at another bar (unknowlingly, altering the entire projection of our evening) then had dinner at a delicious Italian restaurant I found on TripAdvisor.

All I gotta say is… I am SO glad we changed to a private room back at the hostel, which had a private bathroom. Kelsey knew something was wrong at dinner when I turned down a beer. Since we basically shared all of our food at the restaurant, I am left to believe the piña colada I drank earlier that night was the culprit which had me in the bathroom all. night. long.

I was able to recover in time for our 11 AM flight to the beach town of Manuel Antonio. We opted to fly instead of taking the bus because our trip was pretty short and we couldn’t be bothered to spend precious hours of our days on travel. The flight was only about 30 minutes and pretty affordable through Nature Air. We spent about $180 each on two flights: the first from La Fortuna to Manuel Antonio and the second from Manuel Antonio to San Jose.

The La Fortuna Airport looked more like a bar/restaurant with a dance floor. Confusingly, we arrived before the ticketing employees were even there. Apparently, passengers only need to arrive about 30-45 minutes before local fights, so we played cards while we waited. It was sad to say goodbye to our home for the last few nights, but we were so excited to explore the beach town of Manuel Antonio.

La Fortuna was our favorite part of Costa Rica. It’s a beautiful town, with so much to do, and the culture is amazing.

Stay tuned for my next post on Manuel Antonio

– including one of my favorite airbnb’s –